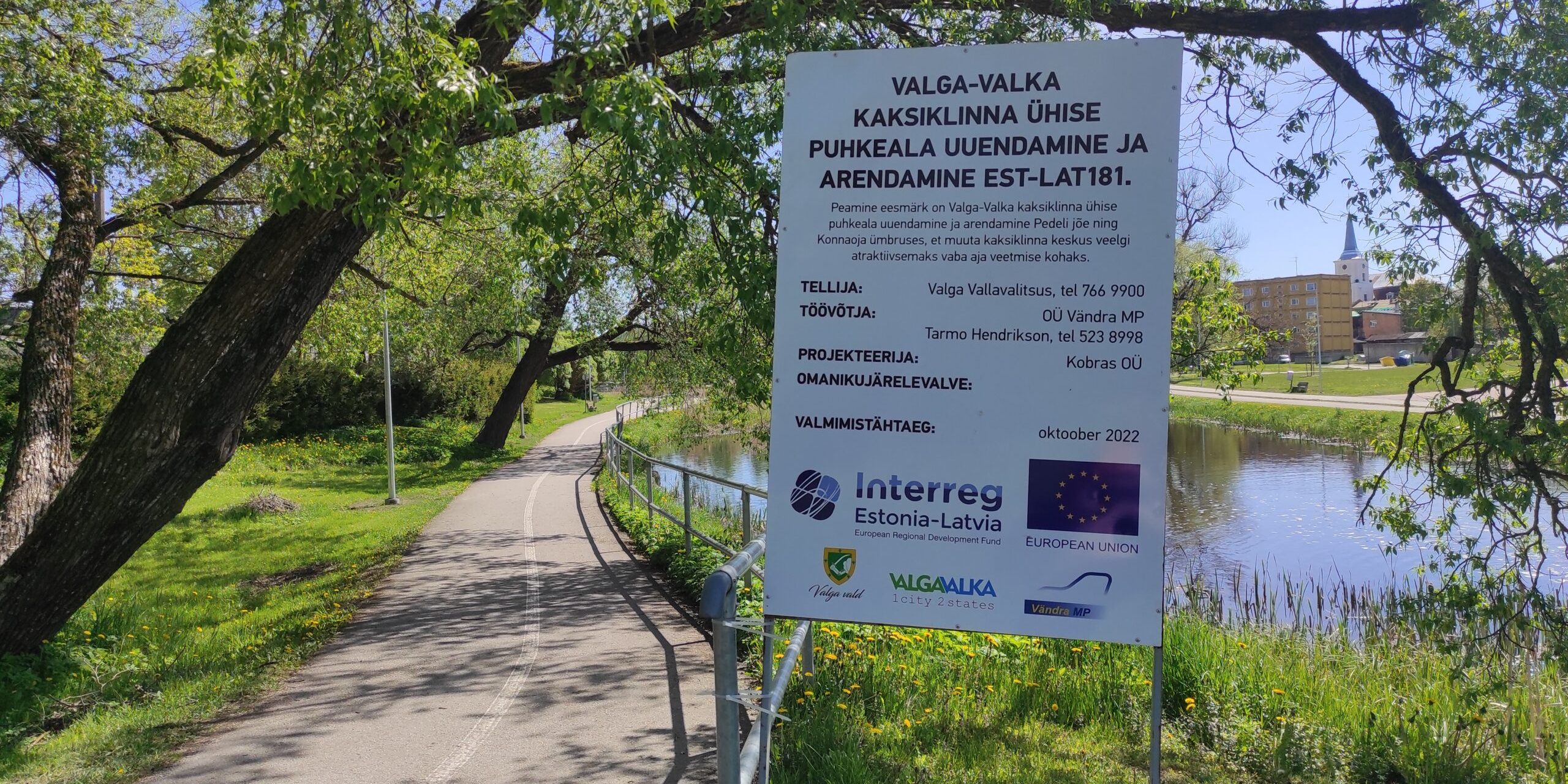 As the next stage in the development of the common urban space of Valga and Valka, the areas in the immediate vicinity of the newly built city center will be repaired – the recreation area of ​​the Pedeli River on both sides of the Ramsi bridge and the surroundings of Varžupīte/Konnaoja from Raiņa/Sõpruse Street to Semināra/Sepa Street. Construction works have begun both in Valga and Valka.

On the Valga side, the biggest work is cleaning the two dam lakes in the middle of the Pedeli River – Veskijärv and Jõekääru lake from excess vegetation and sediments accumulated over time, as the poor environmental condition of the dam lakes has long been a concern for both officials and city dwellers. Cleaning is necessary to slow down the overgrowth of water bodies and to ensure the visual attractiveness of a recreational area.

Ltd. Vändra PT has started preparatory work with the construction of a settlement pond in the area which is known among citizens as Tivoli Square. The settlement pond is used to dry the lake mud enough for transporting and possible reusage. After the work is done, the site will be tidied up.

In addition, street lighting will be installed around Veskijärv, which has been in the dark so far, and a pedestrian crossing will be built on Tartu Street, which will logically connect the footpaths of Valga and Valka.

On the Valka side, the first works are related to renovating the surroundings of the former border crossing point on Semināra Street, where a parking lot, public toilets and a mini golf course will be built. The illuminated footpath to be built on the shore of Varžupīte/Konnaoja will connect Semināra and Sepa streets with the already completed city centre.

Near the Pedele dam lake first work is to install drainage and demolish a depreciated footpath. The whole area around the lake will be given new footpaths and landscaping, the area around Pudrumäe will be tidied up, new recreation places will be built and a fountain will be installed on the dam lake.

As a joint effort of the two local governments, the bridge of Semināra/Sepa Street will be repaired and the section of Varžupīte/Konnaoja will be cleaned from the Semināra/Sepa bridge to the Raiņa/Sõprusepedestrian street. All activities will be implemented by the end of 2022.

Within the framework of the project “Renovation of the Valga-Valka Twin Town Recreational Area” implemented with the support of the Estonia-Latvia programme, an attractive and high-quality public space will be created, which will create new opportunities for leisure and sports for Valga and Valka residents and visitors. For people living in border areas, tidying up and modernizing urban space is also emotionally important – it creates a sense of pride about their hometown and the hope that life on the border areas is not completely disappearing.

The total cost of the project “Renovation of the Valga-Valka Twin Town Recreational Area” is 3 061 138 euros, of which the support of the Estonian-Latvian cooperation programme is 787 216,73 euros.

This article expresses the views of the author. The managing authority of the programme is not responsible for how this information may be used.